Jared Frederick
Altoona, PA
A lifelong aficionado of all things History, I have received degrees in that field from PSU and WVU. In 2005, I established History Matters Publications, specializing in historical art and books. I have worked with numerous organizations, including the National Park Service. I am currently an Instructor of History at Penn State Altoona and have more books on the way! Thank you for visiting!

Note: The views expressed on this blog are my own and not those of the National Park Service or its fine employees. All original material copyright Jared Frederick.

I recently found this very interesting article in The Gettysburg Times. As many of you may know, Gettysburg was the home of a German prisoner of war camp during WWII. Author Barbara Platt has a great history of this little known camp in her book, This is Holy Ground.

Shortly after the Normandy Invasion in June 1944, forty Nazi prisoners were brought to Gettysburg to be temporarily imprisoned at the PA National Guard Armory on West Confederate Avenue (which is still there). Eventually, a larger and more secure compound was built on fifteen acres of the Codori Farm just a stone's throw away from the now demolished Home Sweet Home Motel parallel to the Emmitsburg Road. This was Camp Sharpe. Approximately 400 prisoners lived there from July to November of 1944 until it was enlarged in July 1945 to accomodate another 350 men. On the Fourth of July 1944, two men escaped but were soon captured by officials near the High Water Mark believe it or not! In January 1946, two others escaped by sneaking under the barbed wire fence encompassing the camp. They were captured four days later by the FBI on the PA/Maryland border. According to the Gettysburg Compiler on January 12, 1946:

"The two German prisoners who escaped from the Gettysburg POW camp last Thursday evening were recaptured Monday afternoon at 2:50 o'clock near Zora [PA] by prison camp guards, state police from Gettysburg and an agent of the Federal Bureau of Investigation.

Acting on a tip the authorities found the pair hidden in a straw stack adjacent to an unused barn on the property of Clayton Phillips, Emmitsburg R.1, located close to the Maryland line in the Friends' creek section. The Germans offered no resistance but apparently were "very badly scared," according to one of the officers present for the capture.

H. B. Fletcher, special agent in charge of the Philadelphia field division of the FBI, disclosed today that statements made to the FBI by the recaptured Nazis were to the effect that they had escaped because "they liked America, wanted to see more of it and hoped to reach a large city and stay in this country rather than return to Germany.'"

The prisoners at the camp were put to work in the local agricultural industry to support the war effort (though not their own). Some worked at a Heinz Factory in Chamersburg while other picked fruit in Adams and Franklin Counties. The men were paid one dollar per hour (but 90 cents of each dollar went back to the U.S. government to pay for their food and housing)! By April of 1946, all the prisoners had been relocated to another camp or returned to Germany. To my knowledge, no photos of the camp exist. However, we do have a map sketched by the commandant. 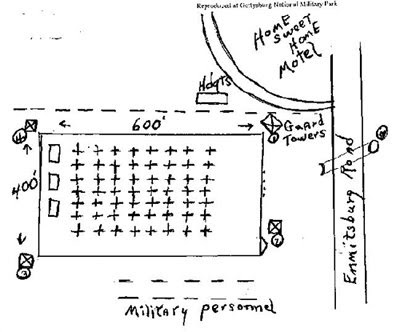 Courtesy Gettysburg National Military Park
The two prisoners found near the High Water Mark escaped via the drainage tube underneath the Emmitsburg Road. Note the guard towers and the former Home Sweet Home Motel.
And that finally takes us to the main story:

German POW seeks American Friend from the past
Published: Friday, May 15, 2009 7:20 AM EDT
By Holly Fletcher


A former German POW is asking Gettysburg Times readers for their help in locating an American friend. It has been more than 65 years since Josef Bibracher “visited” Gettysburg.

He was a 17-year-old German officer cadet from the 89th Mountain Regiment, brought over to the United States from Naples, Italy, in a very basic prisoner of war ship in 1944. He was sent first to Camp Forrest in the south and then to Gettysburg.

A German prisoner-of-war camp was located on Gettysburg battlefield land between 1944 and 1945. The prisoners were brought to Adams County to work in the fields, orchards, and canning factories to replace that part of the local labor force that was serving in the armed services. Jo’s friend, Phil Fairclough, has done several hours of one-on-one interviews with Jo as part of a book he is writing.

“I must say, Jo was a very ‘volatile’ prisoner who provoked many reactions,” he said. Jo admits that, as a soldier, he felt the need to resist and at one camp, he stole the American flag from the mess, cancelling all privileges for his fellow prisoners.

He and three other prisoners also managed to escape the Gettysburg camp, staying out for about a week before the sheriff’s department picked them up at a local farm. “We traveled at night and I remember going through an area full of Civil War statues, which looked quite frightening in the gloom,” he recalled.

While he and his comrades were here, they worked at the Heinz Factory in Chambersburg. Now in his 80s and living in rural England with his wife Maureen, Jo said he has fond memories of the American family he met here.

“For the first time in my life I felt I was accepted as an ordinary human being, by them and their little girl. I am old now, but often think back to the kindness I received from them,” he wrote.

He sent a photograph to the newspaper and is asking readers for their help in locating the girl. He does not recall her name, or her address, but said she would be about 70 years old now. Her father was an employee at the factory where Jo worked.

“I wonder if she still lives in your area. I would be very pleased if she was there and wanted to correspond,” he said.

Anyone with information is asked to contact Josef Bibracher, either by mail: Chameleon, Mossey Green, Ketley Bank, Telford, TF2 0DL, Shropshire, England, or by phone: 01952 610952.

So, that begs the question; is Mr. Bibracher one of the four men who escaped the camp from the scenarios given above, or a whole other event altogether which had previously been lost to history? A fascinating instance in Gettysburg's rich history.

This photo was taken between 1944 and 1945 and is of an unidentified girl whom Josef Bibracher met during the period that he was held at the prisoner of war camp on Gettysburg battlefield. Bibracher is seeking help from the Times readers. He would like any information that might help put him in touch with the unknown girl or her family. Bibracher and the young lady’s family formed a friendship during World War II. Photos courtesy of Josef Bibracher
Posted by Jared Frederick at 11:36 AM